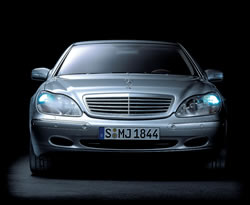 I receive an unusual text message today. “Your chauffeur, Michael, has arrived,” it reads. “Silver Mercedes E Class.” Thank God it’s an E Class, I wouldn’t be seen dead in anything else.
I swan out of the Lagham Hotel accompanied by a little man carrying my luggage, the doorman opens the door to the E Class, smiles obsequiously and says: “Thank you for staying with us.”

The E Class purrs into action and whisks me to the Richard & Judy studios in Lambeth. There another man opens the car door for me, someone takes care of my luggage and I am shown to a dressing room with my name written on the door. After approximately three seconds someone called Zoe shows up and asks what I’d like to drink. Then Lorraine from make-up whisks me away to transform me into a glamour puss with the help of Suzie the hairdresser. When I get back to my room my publicist Rina has arrived and tells me how gorgeous I look and how brilliant I’ll be.

Then the hard work. I have to go on television to defend my argument in this week’s Daily Mail that women of a certain age should make more of an effort to look good as opposed to less. Pitted against me is Lauren Booth (sister of Cherie) who wrote an article saying she is happy with her expanding waistline and wrinkles. When I can get a word in, I think I get my point across. My adversary has rather strangely just as long in hair and make-up as I did which I think rather contradicts her argument, but anyway.

After the show I walk out to yet another slick Mercedes.

My phone rings, it’s Bea. “I didn’t like that girl,” she says. “She was evil with you.” Then I speak to Leo. “Mummy, that dress was so lovely for you.”

I think he was referring to my glittery top. Just his sort of thing.

At Marylebone Station I am in for a shock. Gone are the little men to open doors and carry my bags. Instead I am surrounded by people talking on their mobile phones or reading the Evening Standard. The train bound for Bicester and my friend Carla’s house is packed and the lighting terrible. The décor is terrible too. Who designs trains anyway? Not someone from the Mercedes team, that’s for sure.

As I longingly remember my two hours as a TV star I think about the fact that there are people who live like that the whole time. What joy. But then maybe without the contrast you would cease to notice.

7 thoughts on How the other half lives