As the world wakes up to a new Formula 1 racing champion in the shape of England’s Jenson Button – which is a bit of a blow to Abu Dhabi’s upcoming race in a couple of weeks – I bring news of another champion. Olivia the golfer.

She set out today to the Abu Dhabi Golf & Equestrian Club in confident mood. “I am going to win,” she said, in the manner of the great Walter Hagen, who once held a party to celebrate his victory in the Open the day before the final round. “And I am going to pick up the trophy.” 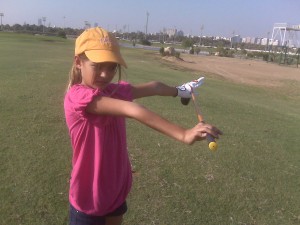 We wondered how we would break the news to her if she didn’t. She has not played much golf, and when she does, although she has a very elegant swing and expansive follow-through, as often as not she misses the ball altogether.

Dismissing all thoughts of failure, she stood on the first tee today and smote her first drive down the fairway to within 35 feet of the hole. Instructed by her caddy, her father, to take the Texas wedge (a putter) she knocked it to within 8 feet, and lagged it nicely for a par. So far, so good. But surely it couldn’t last?

In nonchalant mood, she strolled to the next hole, called for her 5 wood, practised a couple of times, then hit the ball straight as a die to within 20 feet of the cup. She looked on amused as her brother swished and missed his way to the green, where after tacking up and down a couple of times, he settled for an 8. This followed his 10 on the first hole.

Her first putt was a bit short, but the second stopped inches from the hole. She tapped in for another par, muttering to herself that she should have holed the first putt.

And that was that, two holes in eight shots. The end of her first tournament, and able to call herself a scratch golfer, for so far in her career she has not dropped a shot. At the awards ceremony in the club, she picked up her trophy, having established a club record, and beaten the boys to boot.

Then she went on to solve the Israeli Palestinian problem, turned water into wine, did her French homework and went to bed, for it had been a long day.