“Are you a goer?” I overheard a man asking at a party the other evening. The man posing the question was my husband. The person he was addressing was my friend and business partner Mary. I agree that with her tight red dress and hair curly as kale she was looking particularly festive, but I did wonder if this question were appropriate. My normal response would have been to flirt outrageously with the best-looking man in the room, but as our kind hosts were gay, all the good-looking men were looking for equally good-looking men, and not wasting so much as a glance in my direction. I resolved to ask Rupert about this comment on the way home. 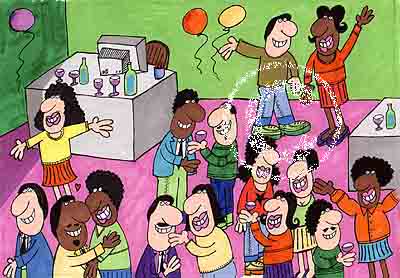 “I heard you ask Mary if she was a goer?”

“I know it looks bad. But there is a perfectly good explanation. I was explaining to her my theory of parties. Parties are made up of two kinds of people: those who want to go home early and those who want to stay late. The problem is, they are normally married to each other, which leads to aggravation. So what I wanted to know from Mary was this: are you a stayer or are you a goer?”

Hmm. Neat explanation. Or perhaps I am getting very French in my suspicions. Here we are all agog at the news of the liaison between Carla Bruni and Sarko. She clearly is a goer. When she decided that she must have Raphael Enthoven, a philosopher, it was of little concern to her that a) he was married and b) she, Carla, was living with Raphael’s father at the time. Along with the usual conquests such as Mick Jagger (while he was married to Jerry Hall) and Eric Clapton, she also dated Francois Fillon, the French prime minister. This is probably not the first occasion that the French president and prime minister have shared the same squeeze, but it’s definitely the first time that the French public have been made aware of it. While we haven’t been at too many parties this season – Rupert and I shared an office lunch – no streamers, no dancing, very little snogging – we have been invited to Christmas Eve with our wine-making friends Jean-Claude and Alexandra in their chateau. Nervous as we are about the police and their breathalysers, I phoned Jean-Claude to ask him what time we should book a taxi for.

I was already quite nervous about this: according to one friend, the French go first to Midnight Mass, then party on afterwards. As a girl who likes to be in bed by ten o’clock at the latest, this is disheartening news. Jean-Claude suggested various times for the taxi, then said:

“It’s all too complicated. You must stay.”

So, it’s official. Rupert and I are both stayers. Although he points out that perhaps it is possible to be a goer and a stayer. I will question him further on this issue. In the meantime Merry Christmas!

One thought on Are you a goer?