In 1207, a terrible massacre occurred in Béziers. This sleepy southern town – just half an hour from our house – was home to a number of Cathars, a sect deemed heretical by the Catholic Church. At the behest of the Pope, the French king got up an army, tempted with promise of booty and rewards in heaven. When they got to Béziers, the army managed to break into the city. The terrified citizens took sanctuary in the cathedral, only to hear these dread words from the Crusader leader: “Kill them all, God will know his own.”

The reason I am relating this gruesome tale is that, 800 years on, a similar massacre is set to take place, also on holy ground. The vanquishers had built an enormous cathedral in Béziers, more like a fortress than a cathedral. If you walk round the corner, as I did last weekend, you pass through a glorious cloister, and into what is known as the ‘Bishops Garden’. Beyond there is a formal garden, with views to the Pyrenees. Here stand a line of plane trees, maybe a hundred years old. They provide shade, colour and light. Their autumn leaves make a cheerful sound in the autumn afternoon. But they, like the Cathars, are condemned. On November 26, on order of the mayor, a crane and a gang of workers will chop up the trees, winch them over the cathedral, and there will be nothing left but a row of stumps and a memory of a better past. 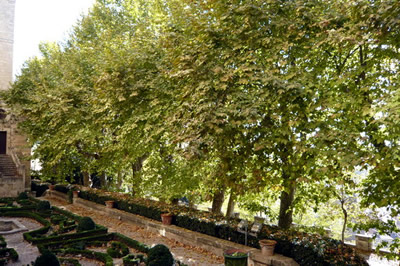 The locals who appreciate such matters, including Béziers procurer, Charles Puig and artist Simon Fletcher, are outraged that this is going ahead, especially as the work is set to cost 100,00 euros. But the word from the mayor’s office is that “Le dossier est plie”: the case is closed.

It seems rather a shame. And very short-sighted. As Simon Fletcher says: “I wonder if it has occurred to our French hosts that the main source of revenue in the Herault comes from tourism and foreign residents who come for the climate and landscape. Will they continue to do so when all the plane trees have been cut down and the fine landscape between the coastal towns and the hills is dominated by wind farms and cheap housing?”