I have long maintained that the Nobel Prize for Literature should only be given out every four years. I don’t think there are enough writers around to warrant such an accolade every year. Now, having met one of them, I wonder if it should be cancelled altogether.

The meeting did not begin well. I, of course, had no idea who he was. His name is Orhan Pamuk and he won the prize in 2006. I was at a dinner in Goa when the host asked if I had met so and so who won the Booker. I pointed to Orhan Pamuk and asked if he meant him.

“No, he won the Nobel,” he replied. Rarely have I felt more ignorant.

I tried to make amends with the Nobel Laureate. I apologised for the fact that I had never heard of him, said what an honour it was to meet him and asked him what it felt like to win literature’s highest prize.

“Such a journalistic question,” he spat out.

Funny that, coming from a journalist. But being a determined hackette I persevered. “Look, I’m just really interested, I just wonder what a difference it made to your life.”

“It made a difference to my bank account and my email account,” he replied before turning away to talk to someone far more important. 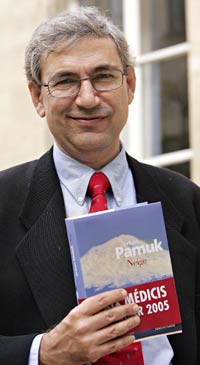 Dinner was awful. I sat in the middle of the table with two separate groups talking animatedly either side of me. This is not a position I am used to. Normally I am right at the centre of the party. I was strongly reminded of the bit in Muriel’s wedding where she finally cracks after years of trying to make friends with the cool gang. “I’m not nothing,” she weeps.

I am home now and very happy to be here. India was all I had imagined; colourful, busy, crazy, chaotic, messy and vibrant. The Nobel Laureate was not.

19 thoughts on A Nobel Meeting